PLEASE NOTE THIS MEETING IS ON A THURSDAY AS THE HALL IS HEAVILY BOOKED.

LECTURE AT THE NEW ENERGY CONFERENCE 2016 USA – MORAY B. KING

We take pleasure in presenting this new video that gives a new twist to our understanding of what may be going on in the cell that powers a car. Moray King gives a great presentation with copious slides and illustrations which we have printed out for your viewing at the meeting.

Why this presentation? It gives a clear path for futher experimentation and cell development. Many design variations are still yet to be tried and tested, so if you have built a cell and have come to a dead end we feel sure this presentation will give new inspiration and direction.

We are also delighted to have Dr Anthony Lingham continue with his commentary on this vast topic and I am sure he will be a great help in making sense of the science behind this and other theories.

Anthony is happy to lead further discussion so please bring your questions which may assist in our understanding and where we go from here.

Dr. Lingham gave a great lecture at our last meeting and we are sincerely thankful for his insights and analysis from a Scientific and Chemistry point of view.  His brief is below for more details.

From: Moray B. King
Date: Thursday, September 15, 2016
RE: From Nanobubbles to Ball Lightning

When I first began researching the reports of anomalous energy production from water electrolyzer projects in 2006, I assumed that zero-point energy (ZPE) was somehow involved in dissociating water into hydrogen and oxygen. I soon changed my mind when I learned about the strange behavior of the Brown’s gas torch. It exhibited a cool flame just a little above the boiling point of water, yet the torch could vaporize tungsten, which requires a temperature above 10000 degrees F.

However, the phenomena reminded me of something with which I was familiar: The research of Ken Shoulders. He discovered a form of microscopic ball lightning that he called “electrum validum” (EV) that had the ability to disrupt atomic bonds whenever they struck conductive material. EV’s disrupt atomic bonds with coherent energy, not with heat. When Shoulders became convinced that their energy was sourced from the zero-point vacuum energy, he renamed them to “exotic vacuum objects” (EVO). It appeared that something akin to EVO’s was in the Brown’s gas torch. If this were the case, then the various HHO projects offered the simplest means for hobbyists to construct coherent ZPE devices.

The explanation had one problem: the EVO or microscopic ball lightning requires a symmetrical spherical form, around which a plasma discharge surrounds to form the plasma vortex ring or “plasmoid.” I hypothesized that a microscopic water cluster had to be present, but I could not find any supporting evidence in the standard scientific literature. However, last year when I researched the water gas project of Ryushin Omasa, I learned Omasa was producing nanobubbles of hydrogen, and moreover Japanese researchers discovered that water nanobubbles of any gas are surprisingly stable. As a result of laser back-scatter measurements, the scientific community has finally accepted the existence of stable nanobubbles. At last I found my hypothesized water cluster particle to support the formation of microscopic ball lightning!

In an internal combustion engine the big anomalous energy manifests from microscopic ball lightning – not hydrogen combustion. In my presentation last year I proposed that simply combining fog gas with a huge plasma discharge in a combustion chamber could drive a genset with excess energy. This year I discovered the research of Walter Jenkins who has been doing just that, independent of me or any of my information. This year all the pieces of the HHO energy puzzle came together to yield my best presentation on this topic.

YOUR CONTRIBUTION WELCOME: There will be opportunity for UPATES if you wish to share your news and developments at the meeting.

FROM THE “ENERGY TIMES NEWS LETTER”

When my Water Fuel Secrets presentation was released from a couple conferences ago, to my surprise, it was one of the most popular videos. Maybe it is because it is much simpler to build an electrolysis cell than it is to build a complicated electrical circuit. In any case, the entire field of water fuel research is making massive strides.

Moray King has been researching an area of “water fuel” that is overlooked by most researchers and that is the energy gain mechanism that could be possible for true overunity gains in the engine. The claimed successes that are 100% water fuel don’t have enough gas that would typically be needed to run the engines so what else could be at play?

Based on a lot of published studies by academics, experimental results, and personally interacting with some leaders in this field, Moray has put some pieces of the puzzle together, which helped to develop a theoretical basis for these energy gains.

Vibrating water will create small bubbles that cavitate (implode) on themselves and there is an energy release that appears to be more than what was required to create the bubbles to begin with. Could we be creating microscopic ball lightning in a combustion chamber of an engine by applying this type of concept in our water fuel experiments? Ball lightning is thought to be tapping Zero Point Energy (vacuum energy or the aether) and if this is done at a very small level in an engine, this very well may be where the extra potential energy is coming from in order to run an engine on “water”. I’m going to be incorporating some of the concepts that I learned from Moray’s presentation in my own experiments.

GET YOUR COPY NOW:

This presentation is loaded with references, patents are cited and Moray reveals who he considers to be the modern day Stan Meyer – this person doesn’t even have to electrolyze the water so he could be way past what Meyer ever did!

If you’re like me, you’re probably sick and tired of all the claims by all these so-called experts that claim to have duplicated or replicated Stan Meyer‘s or other people’s water fuel technology.

Simply, he ran a dune buggy using water, air and electricity. It is probably the most documented “water fuel” technology in history and he has dozens of international patents to cover just about every aspect of his methods.

This is a video presenation and book that documents all of the details that I have already given out for free over and over and over throughout the years but for the most part it has fallen on deaf ears. So here it is in a very comprehensive package so that it cannot be ignored any longer. 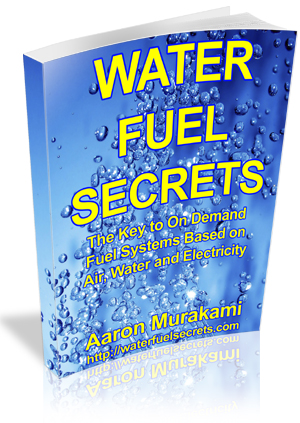 Various aspects of this was hinted to me over time and I was put on the right track by those who were “in the know”. One thing led to another and suddenly the word NITROGEN popped out of many patents owned by Stan Meyer himself, which put the debate to an end once and for all.

It’s basically all about NITROGEN, the most abundant gas in our atmosphere. The self-proclaimed “experts” insist that nitrogen is completely irrelevant in Stan Meyer‘s technology or any water fuel technology for that matter. However, without this KEY, it doesn’t matter how efficient an electrolysis cell is, it’s not going to create a suitable fuel for burning in an engine or for cooking your food!

Stan Meyer even says that he is creating a SYNTHETIC FUEL, which means he was not just running his dune buggy on electrolyzed water gas like most people think.

Once you thoroughly study this comprehensive package that includes Stan Meyer’s own words about the function of Nitrogen, you will instantly know that every single person that has denounced this idea are imposters or misinformation agents.

As far as supplementing your fuel (not running an engine only on a water fuel) with an “HHO Booster” goes, you’re even going to learn a new theory that appears to easily explain why they actually do work and allow you to burn a much leaner fuel mixture. And… it does away with all the magical explanations about re-arranged water molecules and other nonsense being promoted all over the Internet.

Just in case you missed this it may be of interest to WATER FUEL BUFFS – “its all greek to me….”. A search on youtube will find more clips…

Brief: Dr. ANTHONY LINGHAM  is a specialist in chemical synthesis and chemistry education, attaining his Ph.D in synthetic organic chemistry in 2008 then undertaking post-doctoral experience in high resolution mass spectrometry of small biological molecules. After completing additional studies in education, he has worked within the secondary teaching sector in an ongoing effort to encourage an interest and understanding of science in students at younger ages. As an accomplished practical demonstrator of applied chemistry, Anthony has been a mentor for secondary, tertiary and doctoral students undertaking studies that involve wet-chemistry techniques, the application of theoretical chemistry principles to the development of new chemical compounds, as well as the analysis and characterisation of organic molecular products.

Anthony’s interest in renewable energies began in 2001, initiated by the formation of a small company to investigate the use of modern airfoil designs to produce use-able power from domestic scale wind turbines. In collaboration and partnership with an electronics engineering specialist, he applied his knowledge of composite materials to the construction of efficient and lightweight turbine blades to validate software for custom wind turbine design.

An interest in the catalytic electrolysis of water as a fuel source began in 2006 after replicating the results published by ​Alex Schiffer, Joe of the ‘Joe Cell’ and other authors. He has since maintained a continued enthusiasm in elucidating the key factors that lead to successful cell operation and a mechanism by which gases other than hydrogen and oxygen could be generated to take part in the combustion process.

We are now registered as CLIMATE TECHNOLOGY RESEARCH GROUP.