Looking beyond the Climate Cult;……. everybody should be aware of this lady’s

brief History (below).     Thank you Australia, for not being sucked-in by this

seductive, powerful personality.     It is a tribute Aussies everywhere. But it

is not finished yet… 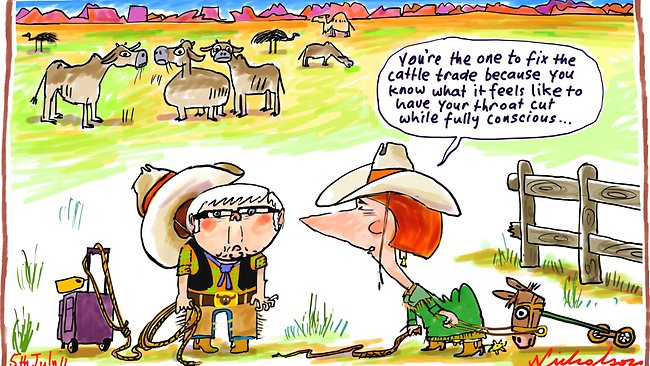 I went onto Google to find some background, some history, of Julia Gillard. And found more than I imagined. A real eye-opener. Typing Julia Gillard into a Google tool bar… a bunch of choices dropped down. And there, was… * Julia Gillard communist * ; so I clicked on that. Up came the Google Page of choices;.. and near the top of the selections was this Online pdf :– [PDF] PM Julia: Atheism, Adultery, Feminism and Fabianism or… just click straight to this:– http://www.fli.org.au/wp-content/uploads/Julia.pdf

SPEAKING TOUR DATES:  Christopher’s updated Australian schedule; at the bottom of this page.

the start of the real carbon war in Australia.

A print-ready copy of this issue of “Carbon Sense” can be downloaded from:

The Green-Labour coalition has burnt the boats – they have left no room for retreat and we face total carbon war from now on.

Carbon Sunday has jolted Australians into the reality that Bob Brown and his Gaggle of Green Geese, supported by the Three Green Puppets (Windsor, Oakshott and Wilke), now control Australia’s future.

There is no room for any of our basic industries in their Grand Green Goal for Australia. They hate mining, farming, forestry, fishing and the service and heavy industries associated with them. Since the days of the first fleet, these industries have given jobs and security to all Australians. Such security was not earned by singing hymns to Gaia and sitting in the shade.

We few skeptics in the Carbon Sense Coalition have fought the carbon battle for over four years now. A few others such as Ray Evans and a couple of great journalists have battled for longer.

For 3 years no one wanted to know us, but now the seeds planted so persistently are starting to bear fruit. We have not moved at all in our positions but the mountain of public opinion has moved massively towards us. Many thinking and concerned people are now actively in the fight.

The Australian public is now aroused and hostile to the carbon tax. The general media has noticed that we exist and even the ABC has turned its baleful eye upon us.

The main goal of the Greens is to get this tax onto the books, no matter how tattered and ineffective it looks after the storm. Once there, it can be extended and increased.

Our goal is to prevent it getting onto the books IN ANY FORM and making sure all players in the game know that irresistible forces will be working to remove and repeal all trace of this ill considered legislation that manages to become law (that includes all the climate control stuff already on the books).

We now must take the fight to the boardrooms and workplaces of Australia. Every director who spends shareholder funds on the basis that all the climate paraphernalia of taxes, subsidies, exemptions, permits and mandates will continue must be warned and challenged to spell out those risks to investors.

Business and trade union leaders must be challenged by their shareholders, employees, members and customers to demonstrate the soundness of their actions.

So please help us to keep up the fight – spread the word, attend the protest rallies, harass your local politicians and candidates, write to the media, vote “No Carbon Tax” in every poll and support the organisations and parties you believe are opposing this baseless war on carbon and on Australian industry and jobs.

The statement below was released within 15 minutes of the end of Julia’s declaration of the war on carbon.

Because of public opposition to a new tax on everything, the tax has been gutted. The PM hopes to buy public support by giving exemptions to almost everyone and offering widespread bribes to voters. As a result, it is now feeble and ineffective and cannot achieve its stated aim.

But the Green-Gillard coalition is desperate and such people cannot be trusted. They will say or promise anything in order to get this new tax introduced.

Once on the law books, the exemptions will be whittled away, the tax rate will increase and the tax bribes will disappear. It is a stealthy cancer in the gut of the Australian economy.

The cost of electricity, food, fuel and travel will increase, but few people will recognise the root cause. Politicians will blame “Woolworths, power suppliers and Big Oil” for the pain.

This new stealth tax is the thin edge of the wedge.

It will have no effect on the climate, but is a fiscal weapon too dangerous to be left in the hands of green extremists.

Leaving Bob Brown loose with the vast powers of a carbon tax is like leaving the grandkids alone in the hayshed with a box of matches.

“Abolish the Stealth Tax” will be the next election slogan.

“The Gore Effect” refers to the well known tendency of the weather gods to send frosts, blizzards and snow whenever the global warming alarmists gather and start chanting.

The most celebrated Gore event occurred in Britain which was struck by massive snowstorms while the British Parliament (with only one dissenting voice) was passing probably the most expensive, destructive and wrong-headed bit of legislation ever to receive such solid support – the Climate Change Act. As that bitter winter progressed, the snows kept falling, the winds dropped, the wind turbines stopped turning and some froze. Zero green power was produced. Every nuclear, coal and gas plant was running at full capacity, but still power supplies failed in some areas and electric trains were marooned. One old steam loco burning coal helped stranded passengers on one line.

Such is the strength of the Gore Effect.

PM Gillard unveiled her plans to use carbon taxes to induce global cooling on Carbon Sunday, 10 July 2011. The Gore Effect struck us soon after.

Here on our farm at Rosevale in Queensland, Australia, sheep work starts as soon as it is light enough to see new-born lambs on the ground. Ever since Carbon Sunday, heavy white frosts have blanketed the ground well up the hills. Sheep start their breakfast with chlorophyll icicles. Then the sun comes up, and the welcome warm nuclear-powered radiation floods the land. The icicles start to disappear, temperature increases at the rate of one degree per hour and rises about fifteen degrees by lunch time.

Julia and her puppets think we are scared of the possibility that, unless we lie in her bed of nails, the temperature may rise a fraction of a degree in 50 years!!!! It rises that much in a few minutes every morning where I live.

What do they put into the water in Canberra?

Anyone with an ounce of brains knows that the biggest source of surface heating is the sun. And many observers of weather and climate also know that the sun has variable and cyclic behaviour. The correlation between variations on the sun and changing weather and climate is also well established, but the mechanism of change was not well understood. Now a determined and inquisitive Danish Climate scientist Prof. Henrik Svensmark and his team have discovered one powerful mechanism – the sun controls cosmic rays which affects clouds. Man and carbon dioxide are not even bit players in controlling global temperature.

Have a look at these well presented videos: http://il.youtube.com/watch?v=Z4XYxL66O_s&feature=related)

World Reaction to the Climate Madness in Australia.

Make sure to watch Andrew Bolt interview Professor Lindzen on the futility of Australia’s carbon tax.

On Tuesday 19th July an historic debate will occur at the National Press club when Lord Monckton debates global warmist Richard Denniss live. This will be the first time a one hour debate on the science and the economics of global warming are tackled head to head with two opposing leading advocates in front of the TV cameras.

Book at:
http://www.npc.org.au/speakers/lord-christop0her-monckton-vs-richard-denniss.html
or ph (02) 6121 2199 if you want to be a part of this historic event.

Dr Richard Denniss is Executive Director of the Australia Institute.

He is an economist with a particular interest in the role of regulation. Prior to taking up his current position he was an Associate Professor at the Crawford School of Economics and Government at the Australian National University where he continues to hold an adjunct appointment. Richard has also worked as Strategy Adviser to the Leader of the Australian Greens, Senator Bob Brown, Chief of Staff to the Leader of the Australian Democrats, Senator Natasha Stott Despoja, and lectured in economics at the University of Newcastle.

He was Special Advisor to British Prime Minister Margaret Thatcher from 1982 to 1986.

Monckton is a widely recognized commentator on climate sensitivity. His climate change lecture to Cambridge University undergraduates was later turned into a full-length feature film (funded by SPPI) titled “Apocalypse? NO!”. Recently, Monckton has devoted his work toward challenging the so-called “consensus” of scientists on climate change. Along with giving lectures and writing scholarly analyses, Monckton has testified before a subcommittee of the U.S. House of Representatives.

Vaclav Klaus, President of the Czech Republic, is author of “Blue Planet in Green Shackles” and a leading critic of global warming ideology. He is visiting Australia soon and will present a series of talks on:

“Threats to Freedom in the Twenty-first Century”.

For information and bookings see: http://rsvp.ipa.org.au/

The Final Word on the Carbon Tax from Senator Barnaby Joyce:

“Send me your bank account details,
I’ll send you a carbon credit.”

Buried under all the information about Tim Tams and a clean energy future, government documents released yesterday reveal that an extra $382 million will be spent on a bigger bureaucracy for this carbon tax frolic.

On page 131 of the Government’s document titled ‘Securing a clean energy future’ the government lists the money it will spend on a bigger public service over the next four years:

– $256 million for a Clean Energy Regulator

– $25 million for a Climate Change Authority, which Bob Brown revealed this morning will be in charge of providing “upward flexibility” to the carbon price

So their bureaucracy is more important than inland rail, which is only allocated $30 million over the forward estimates.

Franz Kafka would be proud of the fact that they are spending more on the bureaucracy than the outcome of soil carbon, which only gets $250 million.

They swindle money out of you with one hand, take their cut, give you some of your money back, then hand the rest of your money to their Green righteous causes. In the future, $3 billion a year of your money goes overseas for carbon credit abatement schemes.

Like those dodgy emails you get from the West African coast, only your government will actually start replying to them with your nation’s bank account details.

It is not morally right to ask people to work . . . . so that . . .they can pay . .their tax which their government, in an indolent way, then casts like confetti around the world.

Booking is via email at gary.morgan@roymorgan.com or by phone at 9629 6888

Lord Monckton and Professor Bob Carter will speak in Brisbane and at Noosa.

All other venues: Lord Monckton only